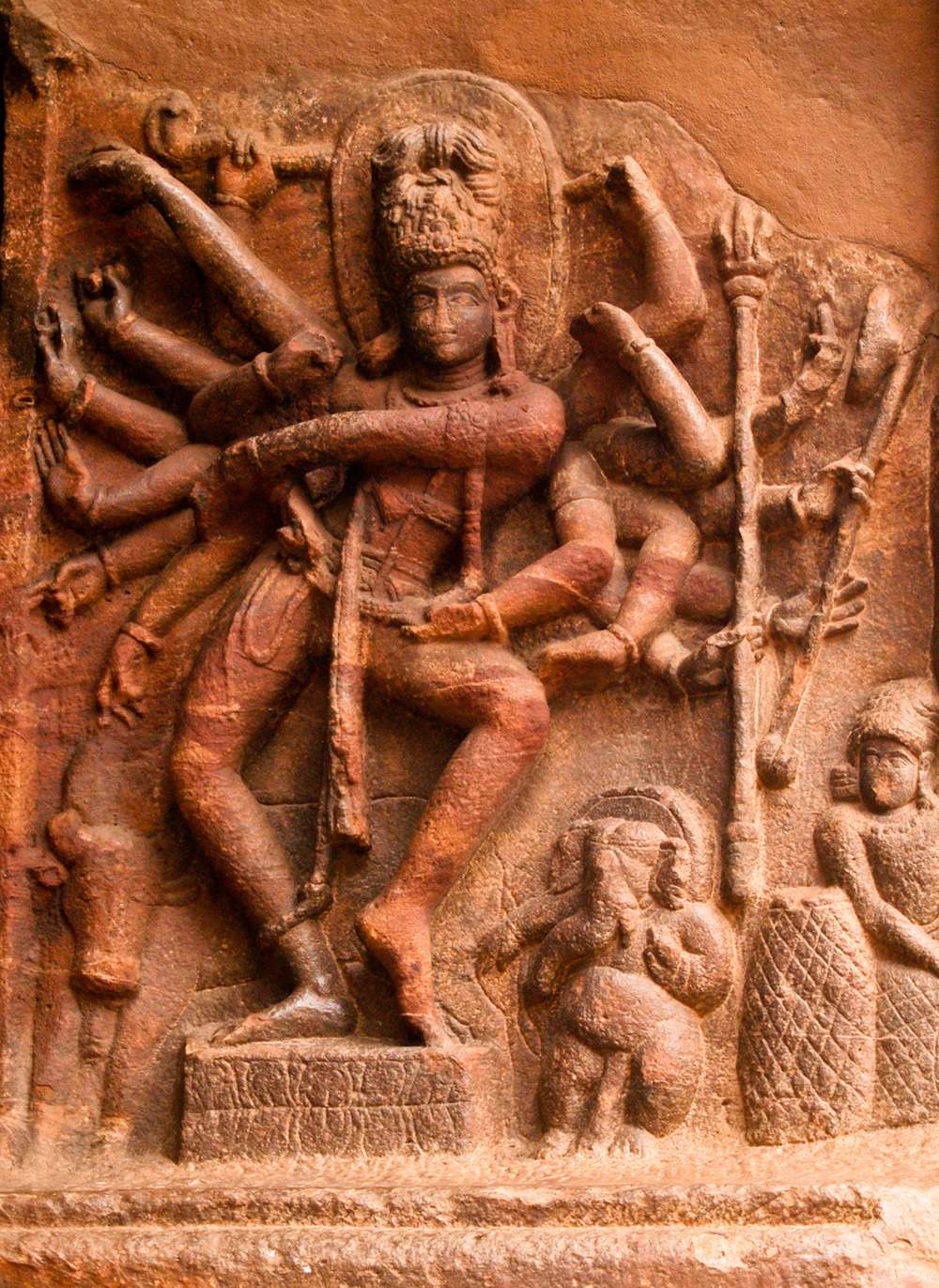 There are four caves or rock cut temples at Badami and they are numbered I to ‘I’ fo ‘IV’ easy identification. They are all carved side by side. The first cave is dedicated to Siva, second and third are caves for god Vishnu and the last one is for Jina. There is also a natural cave which is referred to as Buddhist cave. The existence of places of worship of Saiva, Vaishnava and Jaina religion side by side testifies to the religious tolerance of the people of the Chalukya period which is worthy of admiration.

This Saiva rock cut cave looks small from the outside. It has a long flight of steps from the ground level to go upto the level of the cave with a pavement in front. The facade of the cave consists of a moulding which has carved ganas in different moods on either side. Above the moulding are four square pillars with two pilasters at each end. The pillars have low relief carving. The temple itself consists of a portico, a mandapa and a garbhagriha. The rectangular portico has some beautiful sculptures, such as Nataraja, Harihara, Ardhanarisvara, etc. The dancing Nataraja has eighteen hands each of which has some weapon or the other. He is dancing in dvibhanga. To his left is Ganapati who is also dancing and by his side is a drummer playing on the mridanga. The whole composition is extremely vibrant. The other sculpture of Harihara is another elegant composition. Right portion of the main sculpture represents Siva as can be identified by battle axe, serpent, and Nandi with trisula. To the left is Vishnu who holds the sankha, with garuda at the bottom. Parvati and Lakshmi are standing on either side of the god. Thus it represents Siva-Vishnu aspect very effectively.

The eight feet tall Ardhanarisvara is another elegant sculpture with gods and goddesses on the top and dwarf ganas at the bottom. The right portion is symbolic of male while the left is female . The harmonious combination of this aspect is fully brought out by the artist very effectively. The bass-relief sculpture of flying gandharva couple within a circular medallion is a beautiful sculpture, expressing the divine smile. The pillars have sculptures of Narasimha, Garuda and Prahlada, Yogi worshipping linga, mithuna figures etc. The small garbhagriha has a linga on its pitha.

There is no inscription in this temple to fix its date. But taking the stylistic evidence and the inscription of Mangalesha in the third cave, it may be ascribed to sixth century AD.