When sightseers visit Mysore, the capital of Wadiyar dynasty, the most-frequented places include the Chamundi Hill, Palaces, Krishna Raja Sagara, Kukkarahali Lake, Jaganmohana Art Gallery, Brindavan Gardens, Lalitha Mahal Palace, Mysore Zoo, specially for the Dasara festival. Though the Wadiyars were well known for their religiosity, it is unfortunate that most of the temples built by them in the premises of Amba Vilas Palace are either overlooked by the natives or ignored by the tourists who get scarce knowledge about them.

The temples in and near the Mysore Palace are:

Consecutive Mysore Maharajas built some of the temples in the Palace during the 14th and 15th centuries. The purpose of building these beautiful temples by the Maharajas was to reestablish the welfare and affluence of the royal family as well as their subjects.

If prudently scrutinized, one can find a temple at all directions. Most of the temples in the Palace are built in such a way that it presents a perfect symmetrical structure in the Palace complex. Even today, pujas in these temples are performed very faithfully. Most tourists are not aware of these temples’ presence as they are secluded and the attention is only on the Mysore Palace.

The famous Mysore Palace has a vast enclosure surrounded by a fort. Within this fort were built some temples, mostly for the personal use of the royalty. One such temple is Sri Varahaswamy temple.

Actually, the entire temple is a Hoysala structure as if built by the Hoysalas at this place. However, it is mentioned that this temple was built by Dewan Poornaiah with the architectural and sculptural slabs that were available at a Hoysala temple in Shimoga. Thus, it is a reset Hoysala temple during the period of Dewan Poornaiah when Krishnaraja Wadeyar III was the Mysore king. From this point of view, this is an excellent example of reconstructing a temple at a far off place when the technology of this type had not been developed as it is today. The temple has a mahadvara and a huge stucco gopura at the entrance. 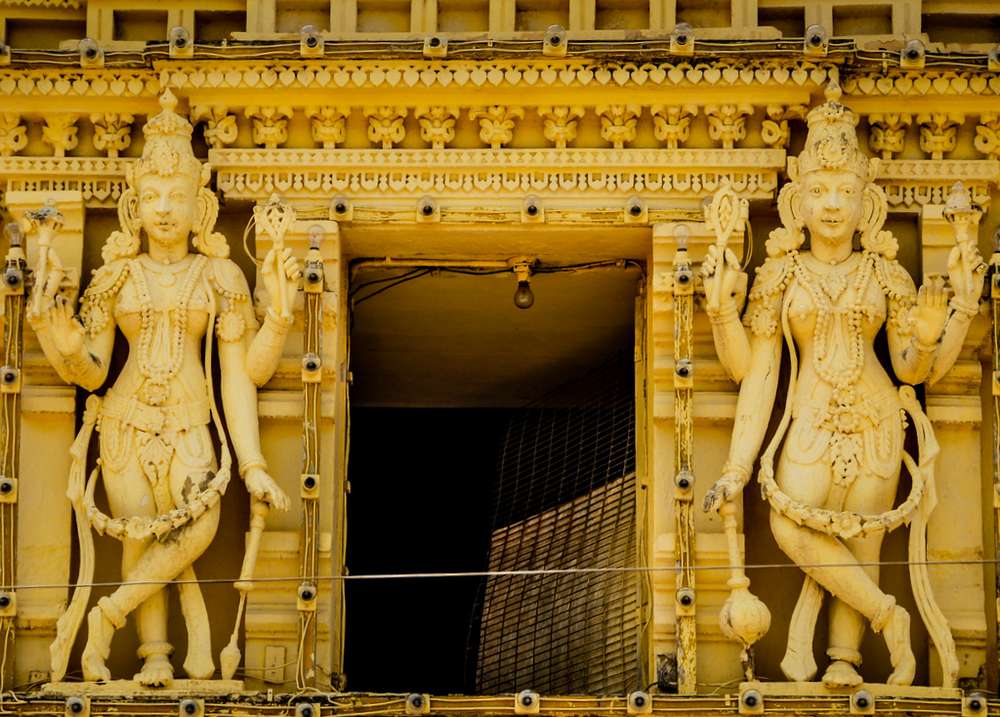 The temple has a basement of horizontal moldings of different types. In fact this temple was built on this basement. There are three horizontal moldings at the bottom over which are found the wall with pilasters and niches. In the middle of the wall runs round the entire temple another eve-like molding over which the wall continues. At the roof level is a decorative eave and additional moldings. The sikhara is of a typical Hoysala type with various tiers.

The temple consists of a garbhagriha, an antarala, navaranga and a mandapa of the later period. The garbhagriha doorway is well executed with minute decorations. The navaranga has well carved pillars also. The garbhagriha has a fine stone image of Shweta Varahaswamy. This image was originally at a place called Srimushna in South Arcot district of Tamilnadu. The Mysore king Chikkadevaraja Wadeyar (1673–1704) brought this image from Tamilnadu and consecrated it at a temple in Srirangapatna.

When this temple was destroyed during the period of Tipu Sultan, this sculpture was shifted to Mysore and consecrated here in 1809. The utsavamurti (image meant for procession) of the temple was also a gift of king Chikkadevaraja Wadeyar. There are also images of Manvalamuni and Vedantadesika donated by Krishnaraja Wadeyar III. The inner wall of the prakara has a painting of the coronation of Sri Rama done in 1865. The navaranga also has some paintings of Ramayana and Mahabharata. Thus, the temple is one of the interesting temples within the precincts of the Mysore palace.

Every year, hundreds of devotees participate in the Bramhotsava of Lord Shwethavarahaswamy located in the Palace premises with religious fervour and gaiety. Hundreds of devotees witnessed the auspicious event as the decorated chariot of Lord Shwetha Varahaswamy, went round the Palace premises. More than 15 vedic scholars led by head priest of the temple chant slokas praising the mightiness of Lord Varahaswamy.