Oriental Research Institute is a prominent establishment having a fertile and precious compendium of Sanskrit manuscripts. It is the depository of over 50,000 manuscripts. The Institution was founded in 1891 by the then Government of the Maharaja of Mysore with the purpose of collecting, editing, printing and preserving old Sanskrit and Kannada manuscripts. It was commenced in the type of a library at the Maharaja’s College, one of the respected colleges in the then Mysore State, and afterwards, when the current building was built to mark the golden jubilee of Queen Victoria in 1897, it was moved to the present-day building. The building is located behind the Maharaja’s College, near the University secretarial headquarters, the Crawford Hall.

Due to the earnest efforts of great scholars like Mr. Kasturi Rangachar, Prof. D.L. Narasimhachar and Prof. T.N.Shrikantayya (Tee.Nam.Shri.), perpetual overseeing work was done and the edited works were published in two series – Bibliotheca Sanskrit and Bibliotheca Kannada. It accomplished worldwide fame when Prof. R.Shama Sastry, celebrated scholar, traced from among the collection the monumental work, ‘Artha Shastra’ of Kautilya and published it. Since then, the Institute has brought out the abundant material available from among its collection in a number of prestigious publications.

When the Mysore University was started in 1916, the library was placed under its management to empower research and study of the manuscripts by Sanskrit and Kannada students and scholars of the University. A supervision committee with the Vice-Chancellor as Chairman and reputed academics was constituted. By 1918, the library was well arranged with an office and four sections:

In 1943, the name of the library was changed to Oriental Research Institute. In 1954, the post of the Director was created. To preserve and safeguard the palm leaf and paper manuscripts, microfilm facility was installed in 1954. When the Institute of Kannada Studies was established in the Mysore University, the collection of Kannada manuscripts was shifted from the Oriental Research Institute to the Institute, located in Manasa Gangotri campus, in 1966.

In addition to publishing the ancient manuscripts by comprehensive research and study by scholars involved for the purpose, the Institute has also brought out a descriptive directory of Sanskrit manuscripts.

The Heritage Building of the Oriental Research Institute, Mysore

The beautiful building housing the famous Oriental Research Institute attached to the Mysore University is located amidst heritage buildings such as Athara Kacheri (Deputy Commissioner’s Office), Crawford Hall and Maharaja’s and Yuvaraja’s Colleges in Mysore. Actually, it was built in 1891 in commemoration of the Golden Jubilee of Her Majesty Queen Victoria and hence it was popularly known as Victoria Jubilee Institute.

The building is a rare specimen of European classical style of architecture combining Gothic, Corinthian, and Romanesque elements. The building faces north and is built on a podium, which gives the advantage of height to the structure. Flights of steps at east and west lead to the center of the structure, which is a spacious hall.

The most attractive part of this hall is the dome, which is of Mansard or curb type roof having slope on all the four sides. The topmost portion has a square flat roof. On either side are colonnades with series of double Corinthian pillars with north-south sloping roof. On either side of the colonnades are two rectangular halls with four Corinthian pillars supporting low triangular triforia. These triforia is ornamental with cut moldings. 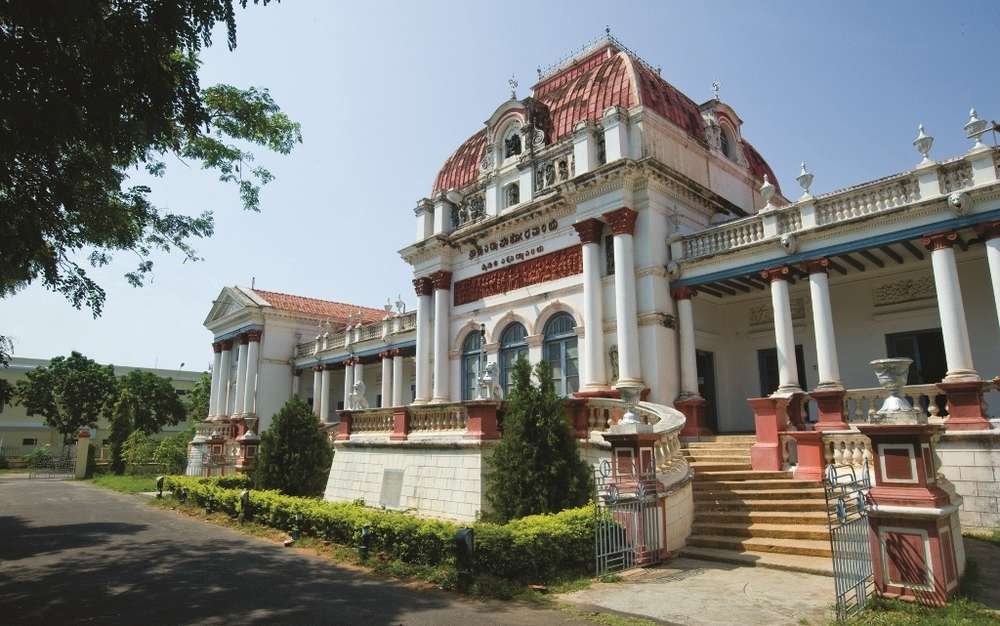 In keeping with the contour of the triforia, the roof of this rectangular hall is in east-west orientation. At the ground level of this hall is an arch-shaped balcony, which enhances the grace of the structure. Thus in one small building three different types of roofs are accommodated.

Another notable feature of this building is the addition of Hoysala sculptures brought here from a ruined Hoysala temple. In the same way, many stone inscriptions also have been brought and kept in the garden opposite the building along with some Hoysala sculptures.

At present, this building houses the Oriental Research Institute attached to the Mysore University. This is a vast repository of ancient palm leaf manuscripts and is a research center publishing ancient works. In fact this Institute is famous internationally because of the discovery of the manuscript of Kautilya’s Arthasastra by the great scholar R. Shamashastry. Thus, it is famous not only for its architecture but also for the palm leaf manuscripts. This institute is visited by hundreds of research scholars interested in Indology, not only from India but also from many other countries.