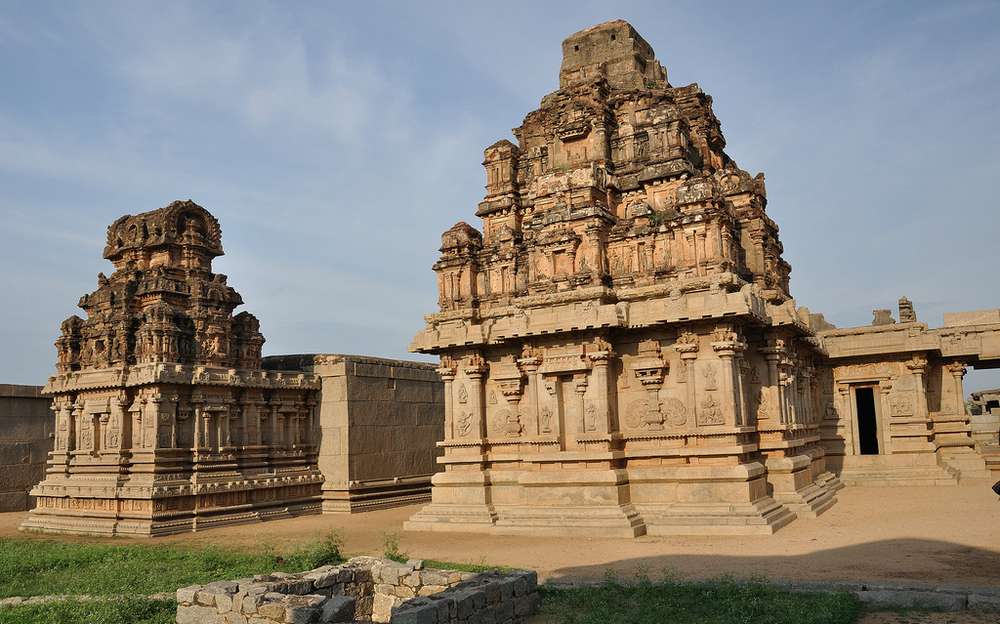 Hazara Rama temple is one of the most elegant temples in Hampi. Its construction was started in the year 1513 A.D., under the orders of Krishnadevaraya and was completed before the end of his reign. 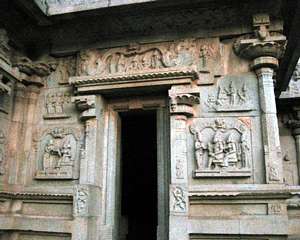 From Bangalore, it was extensive journey of 353 kilometers to Hampi, the capital of the Vijayanagara empire, our first stop, along a uncomfortable narrow tarred road. We reached Hampi at about 6:30 p.m. and parked under a tree whose branches canopied throughout the road. Close by was the Hazara Rama (a thousand Ramas) temple which was splendid in the depending dusk. It is a quadrilateral temple complex set within well-tended lawns, destined for the secluded worship of the Vijayanagar kings. The air was cool and gleaming twilight rays moderated the sharp lines of the granite edifice. We admired the fine statuettes on the outer walls encircling the complex exulting when we recognized the figures. 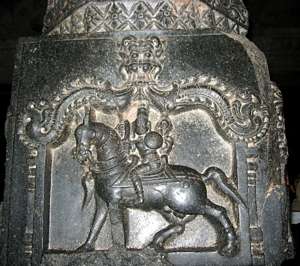 Actually, it is a royal chapel or a private temple for the use of the royalty. The temple opening to the east has a flat roofed dvaramandapa with symmetrical pillars. Passing through the doorway one enters into a square rangamandapa, which has blackstone tall pillars. These pillars are very attractive and contain sculptures of gods and goddesses, like Ganesha, Mahishamardini, Hanuman and different forms of Vishnu.

The sculpture of Kalki holding in his four hands sankha, chakra, sword, and shield and riding a horse is especially noteworthy. The rangamandapa has entrances to the south and north and the western entrance leads to the sanctum. One of these doors leads to the open enclosure from which the garbhagriha and its beautiful vimana become visible. 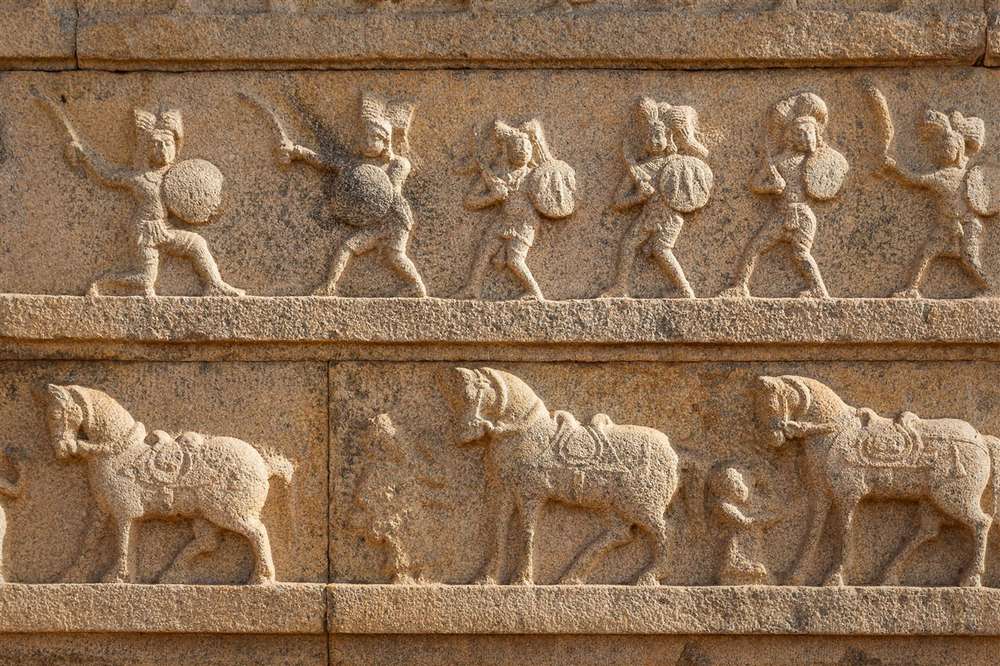 The outer wall of the prakara also built of stone is a great attraction in this temple as it is divided into five horizontal friezes, each containing from the bottom upwards rows of elephants, horses, and Krishnalila stories in addition to some gods like Subramanya, Ganesha etc. Particularly interesting are the stories relating to Rishyasringa, Putrakameshti yaga, Sita svayamvara scene in which Sivardhanush is being carried.

To the north of the main garbhagriha is the shrine for the goddess. Though it is small in dimensions, it is very attractive from the point of view of ornamentation. The antarala of this shrine has on its eastern wall bas-relief of God Narasimha. On its doorway is found a Vaishnava saint giving something to a king. Some scholars have identified this as Vyasaraya and the king as Krishnadevaraya. At the northeast is the Kalyana mandapa built in 1521 A.D.

This is the only temple situated in the core of the royal zone between the residential and ceremonial enclosures. Dedicated to Vishnu in his aspect as Lord Rama, this 15th century temple, is the finest example of a compact Dravida Vimana type of temple. In plan it has a sanctum, vestibule, pillared dance hall, with an entrance porch to the North and South. The Eastern porch is extended into an elegant pillared pavilion. There is a shrine for the goddess to the North which is also elegantly sculpted.

The temple is known for its sculpted friezes depicting the Ramayana, in three tiers, running all around the main shrine, and the narrative sculptures of the Lava—Kusha story on the Devi shrine. It is because of this that the temple was called the Hazara Rama. In addition, the temple is also known for the narrative sculptures of the Bhagavata, especially of Bala Krishna, and the sculpted polished pillars of the Mahamantapa (main hall). It was undoubtedly, the temple of the royal patronage.

Thus, the Hazara Rama temple at Hampi is a special temple built within the palace enclosure and on this account, it may be construed that this was built exclusively for the royalty for their personal use and contains good decorations and ornamentations done by the expert sculptors and architects of the Vijayanagara Empire.

One thought on “Splendors of Sculptures and Architecture of Hazara Rama Temple, Hampi”