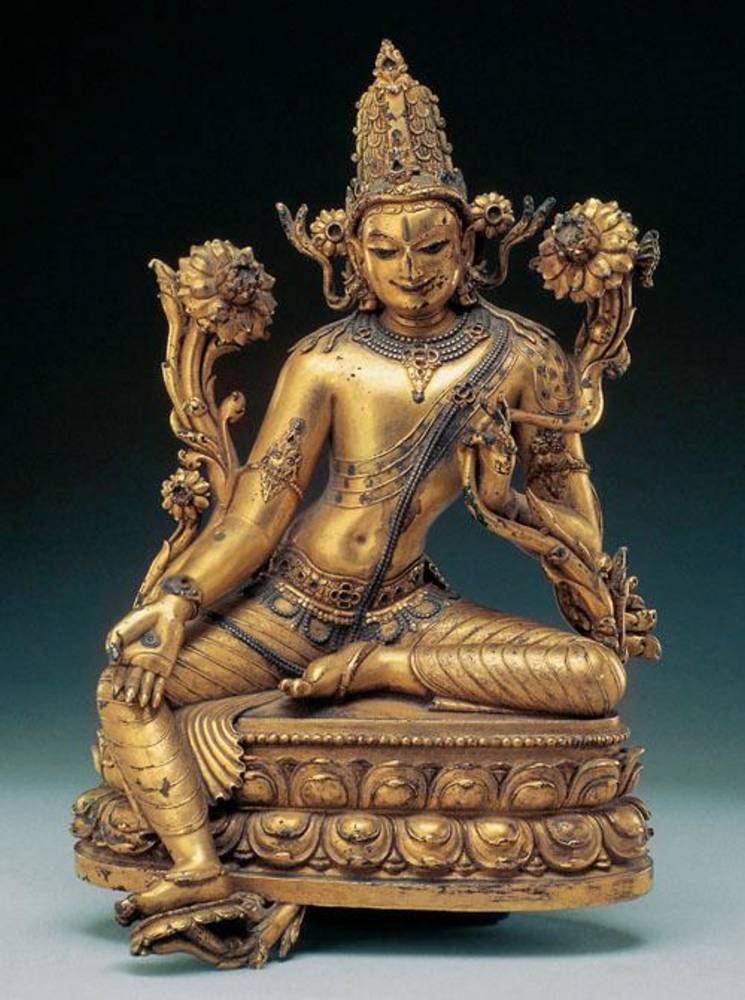 The bodhisattva Avalokiteshvara, a sculpture originated from Kurkihar, during the reign of Ramapala of the Pala dynasty, 11th-12th century. Kurkihar is the historical site was visited by Buddhist pilgrims in the ancient times including the Chinese travelers Fa-Hien and Hieun Tsang. It lies at a distance of approximately 22 km from the Gaya district.

This bodhisattva sits on a double lotus in lalitasana; his right foot rests on a lotus emanating from the base, suggesting that a prabhamandala was in place on another base. His right hand is stretched out, bestowing blessings and boons. The left hand holds a lotus stem which blooms over his left shoulder.

Wearing a girdle with pearls around his waist, the other jewels comprise a necklace, bracelets, arm-bands and a beaded sacred thread that drapes over his right thigh. Notable are the twin kirtimukha, faces, on his armbands. His hair, arranged in a coiffure on top of his head, contains an effigy of Amitabha.

Kurkihar is a village about three miles north east of Wazirgunj. It deserves mention on account of the remarkable abundance of ancient remains. Carved slabs of large size and architectural fragments of all kinds are found in plenty, often built into the walls of houses. Votive stupas are to be found in abundance on the edge of a large tank, great quantities of large bricks of ancient make are still being dug out of the great mound. Some well-preserved statues had been removed by the local zamindar to his house, the most important of which is a figure of bodhisattva Avalokiteshvara.

There is another collection of ancient sculptures in the courtyard of the temple of Bhagwati, among which is a singularly beautiful figure of Buddha in meditation. At Punawan, three miles to the south-west are more Buddhist remains. Here stood the once famous temple of Trailoknath which does not now exist.

A large mound that this village sits on the top of is the remains of what was a Buddhist monastery in antique times. The village hit the headlines in 1930 when one hundred and forty-eight bronze articles were dug out of this mound. Buddhas and Bodhisattvas of all sizes, bells, stupas and ritual objects of the finest workmanship were recovered. Most of these are now on display in a special room in the Patna Museum.

The second of Kurkihar’s two Hindu temples still has a large collection of Buddhist sculptures in it that have been found in the area over the years. One of the best of these is a fine statue of Akshobhya Buddha just outside the entrance of the temple. Note the fourteen calved pillars in the temple also, they date from about the 9th century.