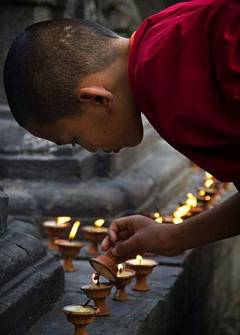 The Dharma being the collection of Universal Laws, is worthy of knowing whether one is a Buddhist or not. However, to follow your own nature, in this sense, is not the same as following your personal habits or whims, as in the expression “be natural?” Nature here refers to your self-nature, or Buddha nature. Maybe the light will only stay on for a minute, but at least you can see some of the problem areas. You may be disturbed by the noise of children, visits of friends or stress at work.

Opposition implicatively insinuates duality. Everything has been decided already in store consciousness. At that moment, we are caught; we are not free people. Our sense of beauty, our sense of liking or disliking, has been decided very certainly and very discreetly on the level of store consciousness. The enlightened individual does not see things as bad, good, coarse, or fine. If so, why are we unable to attain it? Another reason why we cannot see our Buddha nature is that we are burdened with ideas.

Do not be fearful when your mind is scattered; just recognize that it is temporary. The unity of self and universe is a joyous experience. The next day there was heavy rain and the river rose to a higher level. Thus, we cannot verbalize of one or two.

The master Soyen Shaku passed from this world when he was sixty-one years of age. Fulfilling his life’s work, he left a great teaching, far richer than that of most Zen masters. His pupils used to sleep in the daytime during midsummer, and while he overlooked this he himself never wasted a minute.

When he was but twelve years old he was already studying Tendai philosophical speculation. One summer day the air had been so sultry that little Soyen stretched his legs and went to sleep while his teacher was away.

Three hours passed when, suddenly waking, he heard his master enter, but it was too late. There he lay, sprawled across the doorway.

“I beg your pardon, I beg your pardon,” his teacher whispered, stepping carefully over Soyen’s body as if it were that of some distinguished guest. After this, Soyen never slept again in the afternoon.

Buddhist Insight on Surrendering to What is

Giving with an expectation of reward is giving, but not the perfection of giving. Again, the prince Buddha began to think profoundly and ask himself if it really was so, that all the attractiveness and beauty of the shows of life all have something at the back of them that is not pretty and beautiful at all. This is the natural state, eternally unborn. Then out of our fear comes aggression through surrendering to what is. The American clinical psychologist John Welwood, who frequently writes about the integration of psychological and spiritual concepts, writes in Ordinary Magic, Everyday Life as Spiritual Path,

Hard as this may be to grasp, the Buddha, or awakened mind in each person, is whatever we are experiencing in the moment – the wind in the trees, the traffic on the freeway, the confusion we are feeling – if we but surrender to it. Surrendering to it means experiencing it fully, giving it our full attention, without struggling against it or trying to make it something other than it is. In opening to what is, without strategies or agendas, we touch what cannot be grasped – a moment of nowness, sharp and thin as a razor’s edge. And walking on this razor’s edge cuts through the struggle between self and other that separates us from a more immediate presence to life.