Victor Hugo wrote “Notre-Dame de Paris” (1831), usually translated as “The Hunchback of Notre Dame”, when he was in his twenties. Set in fifteenth century Paris, The Hunchback of Notre Dame tells a moving story of a gypsy girl Esmeralda and the deformed, deaf bell-ringer, Quasimodo, who loves her. The success of the book in France gained Hugo great fame and renown. He used his celebrity to criticize the autocratic regime of Napoleon III and encourage the French to revolt.

Napoleon III declared Hugo an enemy of the state. In 1851, just before soldiers arrived to arrest him at his home, Hugo managed to flee the country in disguise. He lived in exile in Guernsey, an island in the English Channel, until the revolution against Napoleon III in 1870.

In exile, Hugo wrote at a fast pace. “Les Châtiments” (“Castigations”,) a volume of aggressive invectives against the emperor, appeared in 1853.

It was also during his exile that he wrote his masterpiece, “Les Misérables” (1865), about Jean Valjean and other characters’ struggles for human rights, love, revolution, and redemption through a period of 18 years. Les Misérables was hugely popular, and when Hugo returned to his homeland in 1870, he was elected to the Senate of the new Third Republic. By the time he died in 1885, at the age of 83, he was a national hero. In Paris, two million mourners joined his funeral procession from the Arc de Triomphe to the Panthéon, where he is buried.

Laments For Leopoldine, the “One Who Stayed in France” 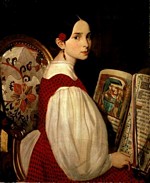 In 1843, Hugo’s oldest and favorite daughter, the 19-year old Léopoldine Hugo, drowned shortly after her marriage in a boating accident in the river Seine at Villequier in northern France. When her boat overturned, she was pulled down by her heavy skirts. Her young husband Charles Vacquerie also died while trying to save her.

“To the One Who Stayed in France”

During his exile in the English channel, Hugo was unable to continue his annual visits to his daughter’s grave. Hugo offered “Les Contemplations” as surrogate, and asked a minimal favor of the visionary world; some hope that his daughter somehow will receive “this strange gift of the Exile to the Dead!” in her eternal rest.

Well, may at least this book, this somber message, reach
The silence as a murmur
The shore as a wave! May it fall there—sigh or love-tear!
May it enter the grave where youth, dawn, kisses,
Dew, the laughter of the bride,
Radiance and joy have already gone—and my heart along with them:
Indeed, that has never come back! And may it be
A song of mourning, the cry of a hope that can never tell lies,
The sound of a pale farewell in tears, a dream whose wing
We feel brushing against us lightly! May she say:
“Someone is out there—I can hear a noise!”
May it sound in her darkness like the footstep of my soul!

– Victor Hugo (from “The Contemplations translated by E. H and A. M. Blackmore”)