A mandala is a ritual diagram that serves as an object of meditation in Tantra and Vajrayana Buddhism. It is symbolic of the universe.

Around the eleventh century, mandala meditation was initiated in Tibet from India and even today, lamas pass on their knowledge to initiates in the same way.

Mandalas are fabricated at the beginning of a puja, out of grains of colored sand watchfully placed on a specially prepared platform. They are momentary structures and in a instruction of impermanence, are deliberately destroyed at the end of the ritual, their sand swept up and dispensed into a nearby stream or river.

Mandala Denotes the Mind and the Body of the Buddha

The word Mandala is derived from the root manda, essence; and la, container. Thus, a mandala is a container of essence. As an image, it may denote both the mind and the body of the Buddha. The origin of the mandala is the center, the bindu, a dot—a symbol free of dimensions. Bindu also means seed, sperm or drop—the salient starting point. It is the congregation center into which outside energies are drawn, and in the act of drawing in the forces, the devotee’s own energies unfold. In the process, the mandala is sanctified to a deity. 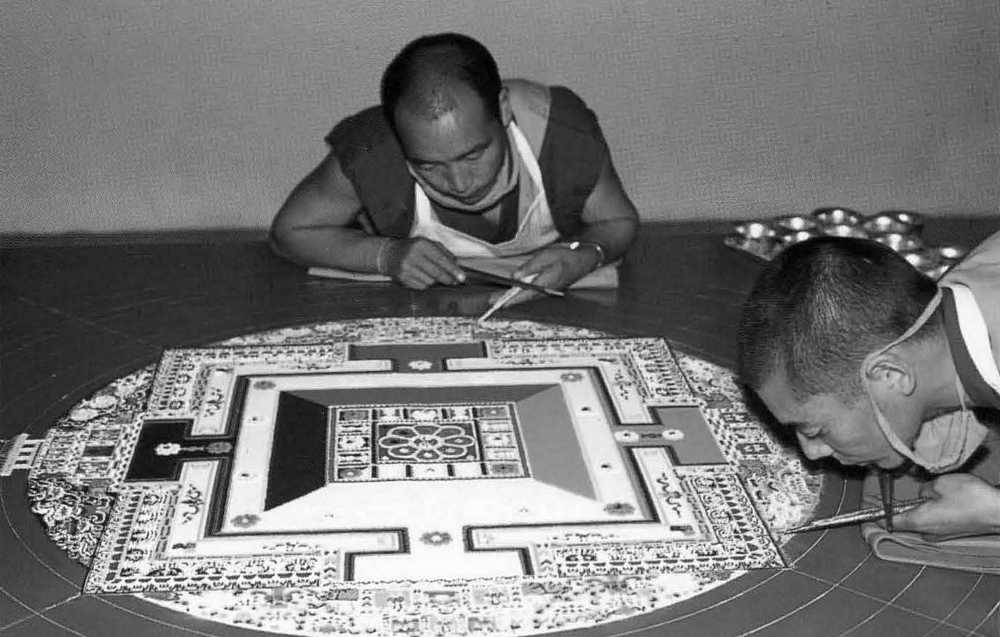 Monks carefully construing a mandala, mystical diagram, with colored sand. As is apparent, the making of a mandala is a mind-numbing process, requiring great concentration and attention to every intricate detail of color, line and form. Once the ritualistic purpose is over, the sand is swept away—one more teaching in the impermanence of things. For desire meditate on impurity, for hatred kindness, and for ignorance interdependent arising.

In its creation, a line materializes out of a dot. Other lines are drawn until they intersect, creating triangular geometrical patterns. The circle drawn around stands for the dynamic consciousness of the initiated. The outlying square symbolizes the physical world bound in four directions, and characterized by the four gates; and the central area is the deity. Appearance does not bind, attachment binds. The center being visualized as the essence, and the circumference, as clasping, a mandala thus connotes a grasping of the essence.

Mandala— The Essence of One’s Own Buddha Nature

A Buddha figure in a Tibetan temple, with a mandala on the roof overhead. The figure of the Buddha can be seen in the center of the mandala, which might be supposed to exemplify the being of the Buddha and his nirvana. Examination of such a mandala would be intended to help the practitioner grasp the essence of his own Buddha nature by following the diagram of spiritual experience laid out in the mandala. 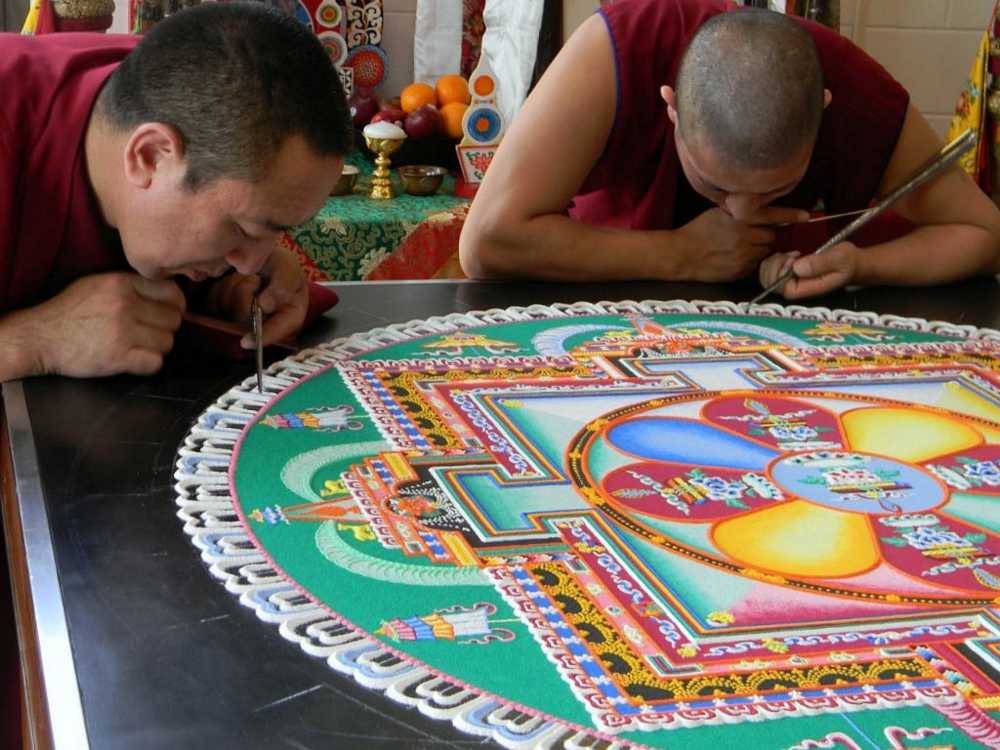 All monks in Tibetan Buddhist monasteries are required to learn how to construct mandalas. They have to memories texts that specify names, lengths and positions of the primary lines outlining the basic structure of mandalas, as well as the techniques of drawing and pouring sand. By this unfavorable conditions are pacified. These texts, though, do not describe every detail of each mandala, but rather serve as mnemonic guides to the complete forms that must be learned from the repeated practice of construction under the guidance of proficient monks. However, most of us seldom recognize the karmic or ritualistic nature of our actions. Knowing only verbally, such people never accomplish anything very beneficial.

Carl Jung’s Mandala and Its Relationship to Art Psychotherapy

The Swiss psychiatrist and psychoanalyst Carl Gustav Jung asserted that the mandala, or, more generally, a circular art form, had a comforting and centering effect upon its maker or observer. He wrote in 1973,

The pictures differ widely, according to the stage of the therapeutic process; but certain important stages correspond to definite motifs. Without going into therapeutic details, I would only like to say that a rearranging of the personality is involved. A kind of new centering. That is why mandalas most appear in connection with chaotic, psychic states of disorientation or panic. Then they have the purpose of reducing the confusion to order, though this is never the conscious intention of the patients. At all events, they express order, balance, and wholeness. Patients themselves often emphasize the beneticial or soothing effect of such pictures.

Jung applied the mandala in his own personal therapy too and thought it to be a visible statement of his psychic state at the moment it was created. As Jung considered the course of producing a mandala to be healing, he would also often construe symbolism appearing within the mandala. He used such descriptions as a bridge from the unconscious to the conscious. He stimulated his patients at the appropriate time in their therapy to learn to decode their own symbols, and thus used the mandala as a channel from dependency on himself, the therapist, to greater autonomy for the patient. Art psychotherapists these days often make use of the mandala as an essential instrument for self-awareness, conflict resolution, and as a foundation for various other art psychotherapeutic techniques in a variety of situations.

Art therapist Joan Kellogg describes the mandala as a still picture taken out of context from a moving picture of the life process of the person. She expounded the process of making a mandala:

Because of the intense focusing when working with the mandala, an altered state of consciousness, an almost hypnotic state may ensue. The mandala then works itself differently than one’s conscious desires. In a sort of biofeedback manner, one gives reign to that part of one’s self that is able to express the contents of consciousness. Then, on reflecting on the finished product, one participates critically.

Cognitively-oriented psychoanalysts occasionally shrink back from Jungian theory asserting that it is too complicated and difficult to understand and accordingly better left to the artistic and religious. Jung every so often has not gained the admiration he warrants among the more scientific schools of thought. The predicament of art psychotherapy has been to some extent similar to that of Jungian theory by reason of the limited amount of scientific research currently existing in such a moderately new field.