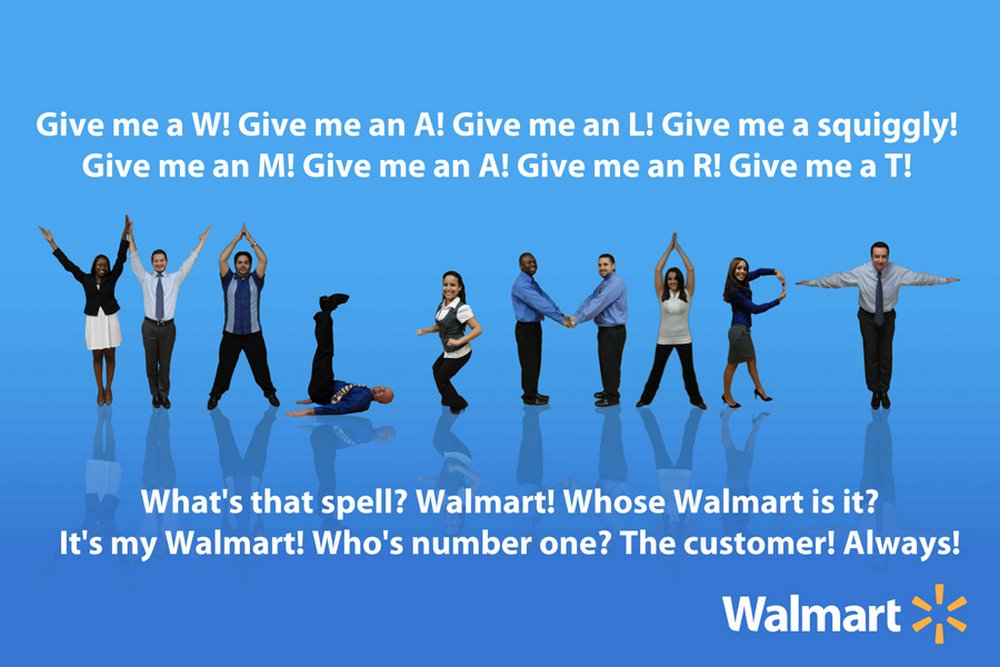 In building Walmart as the world’s greatest retailer, founder Sam Walton borrowed every good idea he’d come across. And one of those ideas is the famous Walmart Cheer:

From Walton’s autobiography, “Made In America”:

Helen (Walton’s wife) and I picked up several ideas on a trip we took to Korea and Japan in 1975. A lot of the things they do over there are very easy to apply to doing business over here. Culturally, things seem so different—like sitting on the floor eating eels and snails—but people are people, and what motivates one group generally will motivate another.

And Helen Walton is quoted,

Sam took me out to see this tennis ball factory, somewhere east of Seoul. The company sold balls to Wal-Mart, I guess, and they treated us very well. It was the dirtiest place I ever saw in my life, but Sam was very impressed. It was the first place he ever saw a group of workers have a company cheer. And he liked the idea of everybody doing calisthenics together at the beginning of the day. He couldn’t wait to get home and try those ideas out in the stores and at the Saturday morning meeting. All training activities include the Walmart cheer. Every morning, store associates participate in the cheer. A few people stand up to read the daily numbers, then break out into a chant—“Give me a W-A-L-M-A-R-T,” with the rest of the people in the room shouting back the same letter. Back then, Wal-Mart still had a hyphen, so between the L and the M they would yell, “Give me a squiggly!” and everyone would do a butt wiggle.

All across America, Walmart convenes nearly 60,000 regularly scheduled meetings each week, all of them starting and ending with the Walmart cheer. Also, each store has a 15-minute shift-change meeting three times a day, when a new wave of cashiers, stockers, and supervisors arrives. Their meetings start with a Walmart Cheer.

13 thoughts on “The Walmart Cheer”