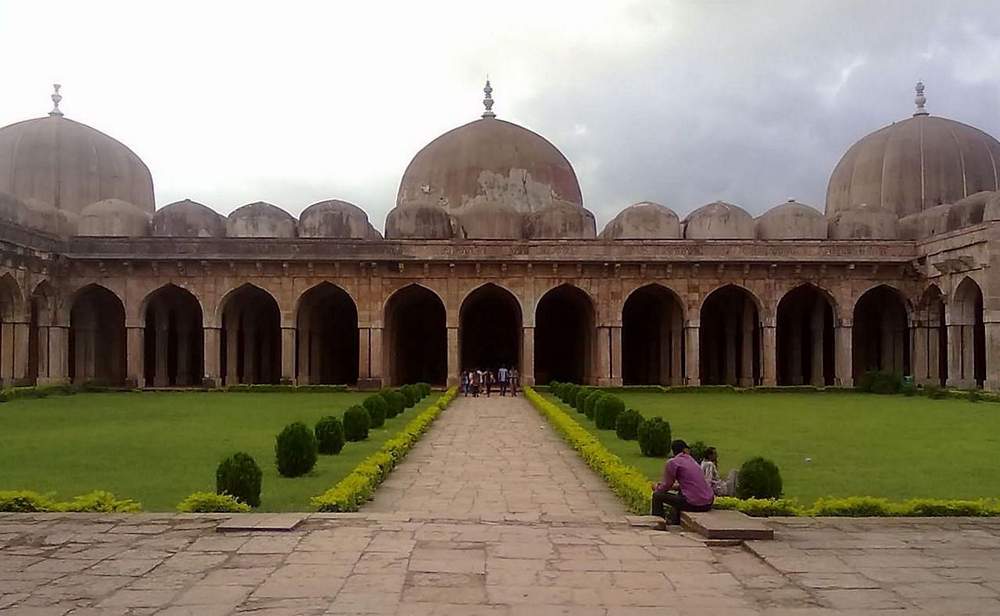 Jumma Masjid at Bijapur has the characteristic of expressing the early characters of the Adil Shahi architecture. In fact, some features of the earlier Bahamani style can also be seen in this monument. Thus it is a good example for the beginning of the Adil Shahi style which culminated in other monuments as it Gol Gumbaz and Ibrahim Rauza.

The Jumma Masjid mosque was built by Ali Adil Shah I in about 1570 AD. It is the largest and most beautiful mosque in Bijapur with series of arches. In fact, the arches are the most important character of this building. It seems it was never completed because it still lacks two minars, which were intended to flank the two sides of the eastern entrance. Though unfinished in this respect, it presents an elegant look.

The mosque is a huge structure with a rectangle of 450 feet long and 225 feet wide. The walls of this building offer a vast area of simple and plain masonry. However, the monotony of the simplicity is relieved by exterior decorations.

The uniqueness of this mosque is the construction of two rows of arches one above the other. The builder has selected the lower rows for ornamentation. The mosque contains a courtyard which is a square of 155 feet each side. This has a row of seven arches on each side and over them projects a wide and deep cornice on brackets. 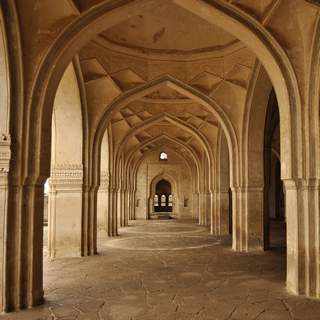 The interior of the sanctuary is equally elegant and impressive. It consists of a large quadrangle, which measures 208 feet in length and 107 feet in width. This is divided into five aisles with the help of arches.

The innermost part is a square nave, each side measuring 76 ft. It has twelve arches, three on each side. These arches intersect above and produce an octagonal cornice that supports the base of the dome. The shape of the dome is pleasing with small isles and small arches all round and a decorated parapet above. Thus, it provides a decorative base for the dome. The mihrab consists of elaborate mural design in relief with bright colors.

Ali Adil Shah I on his return from his victorious and memorable expedition against Ramaraya of Vijayanagara and his treasury overflowing with spoils of war, naturally thought of creating a place of worship (mosque).

The Sultan summoned architects and artisans from Persia and elsewhere and hence the structure has become a building of great elegance, beauty, and majesty. 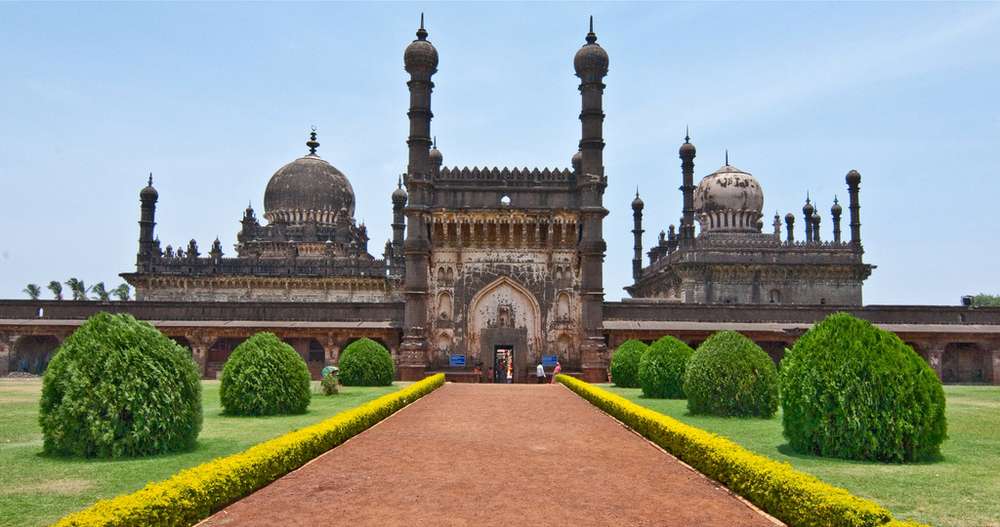 The architectural styles developed by the Sultans of the Deccan plateau that are appreciated in Bijapur, Bidar, Gulbarga, and Hyderabad, are motivated from Persian and Turkish structures.

Ibrahim Adil Shah II ruled the kingdom of Bijapur from 1580 to 1627. He is reputed to be one of the most compassionate and multicultural rulers in history and was a generous patron of the arts.

The sultan of Bijapur was a descendant of the Ottoman dynasty of Istanbul, Turkey. The sultan of Golconda was a Turkman prince who had taken refuge in India. The sultans were adherents of the Shia sect of Islam and were close allies of the Safavid rulers of Iran. A distinctive culture thus developed in the pluralistic community of the Deccan plateau. In India, the Deccan plateau became the prominent center of Arabic literature and scholarship.

Ibrahim Rauza is another valuable and most stylish architectural example of the Adil Shahi style of architecture. Ibrahim Adil Shah II, one of the sultans of this dynasty, developed and organized his own final resting place.

Ibrahim Rauza consists of two core constructions: a tomb and a mosque with several smaller structures. All these buildings are built within a square enclosure with an attractive garden in the front. Both the structures are built on a platform that is 360 feet long and 160 feet wide, around a walled enclosure.

At the eastern end is the tomb and at the western end is the mosque. In between is an open yard in which are found an decorative tank and a fountain. Though the size and purpose of these two structures are different, the architect has productively attempted to produce an equilibrium between them in volume and style. Nevertheless, the tomb seems to be a grander structure than the mosque. The tomb consists of a principal chamber within an arched verandah and both are scaled by a dome. Tall minar-shaped turrets are built at four corners of the building. However, the most beautiful and crowning part is the bulbous dome at the upper story. 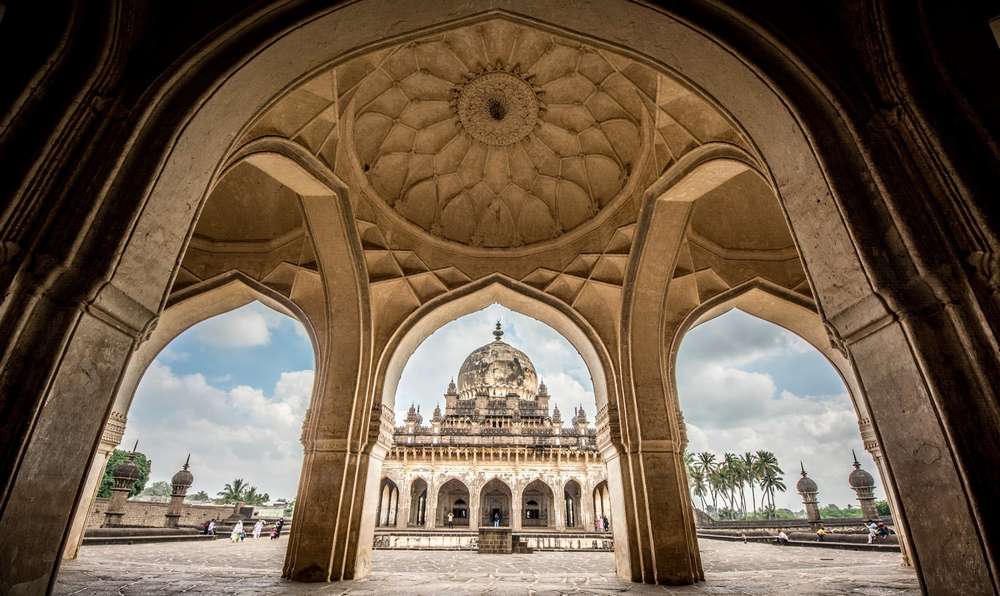 The interior has an arched verandah of row of pillars around the central chamber. They are all abundantly adorned with intricate patterns. The chamber room is a small square of 18 feet each side; but it is elegant because of the introduction of a charmingly carved ceiling at the correct height. Thus, the Ibrahim Rauza has a well-executed plan of a building in its entirety, harmonizing architecture with ornamentation. 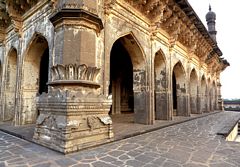 The mosque forming the other part of the Ibrahim Rauza relates harmoniously in the mass of its proportion and architectural treatment as well as width of frontage. Though it seems slightly smaller, the comparisons overlook in terms of minars at four directions and a slightly smaller elongated dome. This congruence is the real uniqueness of the Ibrahim Rauza. Between the two and in the center is a beautiful entrance with two minars at each corners. Thus, the whole composition is highly appealing.

Scholars have felt that if this were to be built of marble, the Ibrahim Rauza would have been a close challenger to the glory of the Taj Mahal.

Through architectural wonders such as the Ibrahim Rauza, the Adil Shahis immortalized themselves through this structure which is at once a combination of majesty and beauty.