Charles Baudelaire introduced the idea that no woman is so beautiful that her beauty would not be enhanced by cosmetics. 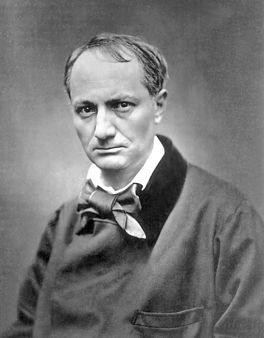 For much of the history of humanity, the wearing of cosmetics by women has been viewed, in the West at least, as something associated with harlots and stage performers (with those two professions once being considered almost equally disreputable). As an early nineteenth-century song once asserted, it is nature itself that “embellishes beauty,” so what need would a virtuous woman have for makeup?

The French poet and essayist Charles Baudelaire (1821- 67) was raised in this culture of “naturalized beauty” and never really questioned it in his early years. But then, in the 1860s, the man who coined the word “modernity” began to question what Romantic artists and writers referred to as the “supremacy of nature.” In his book, The Painter of Modern Life (1863), he turned his attention to the nature of beauty in the chapter titled “In Praise of Cosmetics.” Charles Baudelaire wrote in his “In Praise of Cosmetics” (1863,) “I am perfectly happy for those whose owlish gravity prevents them from seeking beauty in its most minute manifestations to laugh at these reflections of mine … .”

Baudelaire had always felt especially drawn to the opposite sex, and was conscious of how society’s notion of beauty was changing in an increasingly industrialized world. His essay on beauty was a little too whimsical to be taken absolutely seriously, but it was nonetheless a triumphant defense of the notion that makeup can make the beautiful even more beautiful. “External finery,” Baudelaire wrote, is “one of the signs of the primitive nobility of the human soul.” Every fash ion is “charming,” and every woman is bound by “a kind of duty” to appear magical, to astonish, and to charm her fellows. Accordingly, nature could now be imaginatively surpassed by applying black eyeliner, which “gives the eye a more decisive appearance,” and rouge, which “sets fire to the cheekbone.” Baudelaire’s emphasis on the beauty of artifice over nature marked a significant departure from the Romanticism of the first half of the century, reflecting the rise of decadence and Aestheticism, to many of whose practitioners he was a hero.