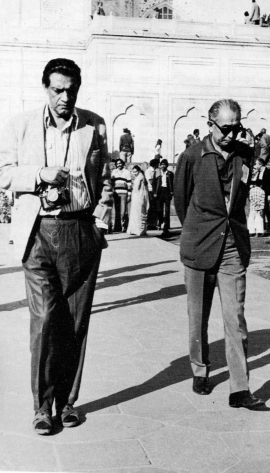 Three of the greatest auteurs of world cinema, India’s Satyajit Ray, Italy’s Michelangelo Antonioni, and Japan’s Akira Kurosawa at the Taj Mahal around the mid-1970s.

Satyajit Ray (1921–1992) was a Kolkata-born an Indian filmmaker regarded as one of the greatest auteur of world cinema. Michelangelo Antonioni (1912–2007) was an Italian film director, screenwriter, editor, and short story writer. The celebrated Akira Kurosawa (1910–1998) was a Japanese film director, screenwriter, producer, and editor. Akira Kurosawa is widely regarded as one of the most influential filmmakers in the history of world cinema.